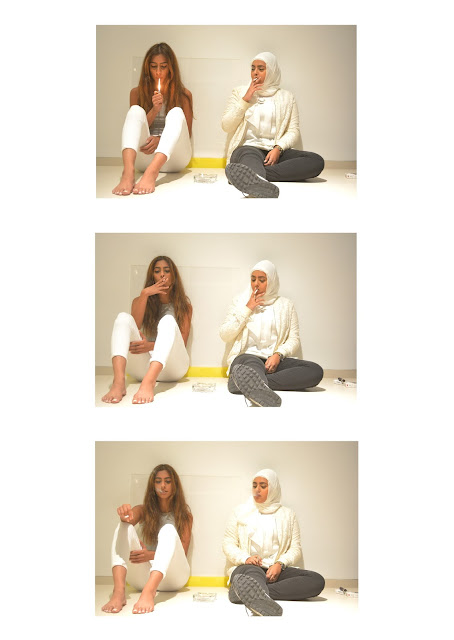 Duly named “The Yellow Underline”, the series of photographs that I created is considered to be an absolute embodiment of the archaic debate that revolves around “Islam and Peace”, taking into consideration the controversial argument that stems from the stereotypical mentality that foreigners possess of Islamic women. Seeing that those individuals who have not had the privilege of being introduced to the central motives of Islam seem to link a negative connotation of the abstract ideal of “peace” to the actual pillars of Islam, I was provoked to showcase those very opinions through photography, a medium that is unpretentious yet magnanimous in the way in which it could speak volumes about the social issue that Islamic women seem to face in the modern day.

The photographs are simply a depiction of a veiled women who is committing the “sin” of smoking a lit cigarette - what would usually be considered as an act of mutiny against the core concepts of Islam…or actually, that’s what people might think. For a woman, who is dressed in the respected hijab is set to be living up to the expectations that society has pressed upon her, a perfect housewife who obediently and religiously follows the unsaid and unwritten rules of Islam. My aim was to tackle the meek social issue that Islamic women and men are not equal. For who in their non-ignorant mind would separate the two genders based on acts that are justified for men, but forbidden for women. Isn’t Islam supposed to preach equality amongst all? Have we not grown out of obliviousness and unfamiliarity?

Inspired by the works of Salman Al-Najem, a Bahraini artist who exposes the truth behind social issues through animations and cartoons, “The Yellow Underline” aims to do the same, except in a more “adult manner”, a complexity which cannot be ignored. The women is dressed in an all white attire, seemingly pointing out to the false purity and the dichotomy that exists between her veil and the act that she is committing. The yellow line that is painted across the clear acrylic sheet indirectly points out to the well-known cautionary tape that is used in crime scenes and other relevant scenarios, indicating the way in which society rejects and looks down upon women who seemingly rebel against the Islamic core concepts. As for the clear acrylic sheet that separates the woman from the cloud of smoke emanating from her lips, it points out to the transparency and the shallowness of such a type of thinking that society possesses of a trivial act that Muslim men commit on a daily basis. My intent is to highlight and emphasize upon the fact that women and men need to strive to egalitarianism in Islam, otherwise Islam cannot preach to be peaceful amidst tension that is created through gender inequality.

At 20 years old, I can proudly claim that I am a studio artist that has seen enough of social issues and political revolutions and uprising whilst growing up in Bahrain to have formed my own viewpoint of Arab and Islamic societies in the modern day. I have been meticulously studying art for seven years.
Posted by Dr. Pamela Chrabieh at Monday, June 15, 2015

Dr. Pamela Chrabieh, Assistant Professor of Middle Eastern Studies at AUD has launched the 3rd Edition – November/December 2015 of the Peace Art in Dubai blog, an online exhibition of artwork for Peace by AUD students in MEST 329 - Islamic Art and Architecture.